The #Sponsored session at Advertising Week 2017 promised to shed light on the do’s, don’ts, and grey areas of #sponsored content “from multiple points of view.” And the panel discussion started off strongly.

Mary Orton, the style blogger behind Memorandum and the co-founder of Trove, a mobile style app, talked about how the updated FTC requirements have changed she discloses paid partnerships. Orton said she thought #ad and #sponsored are terms from another era and a different medium. The high profile influencer added that she only works with brands that she actually uses and often creates more content than an agreement calls for because she so passionate about the brand. Now, that promised to be a point of view that coulda been a contender.

Melissa Davis, the EVP of ShopStyle, the world’s most fashionable search engine, added her two cents on how to be successful, creative, and remain authentic while working within the guidelines of the FTC.

Kim Waite, the VP Global Communications at Laura Mercier Cosmetics, disclosed how her brand has shifted traditional marketing and advertising budgets to influencer partnerships and discussed their stance on transparency and best practices.

But, then Ellie Altshuler, an attorney at Nixon Peabody, spoke. Altshuler, who specializes in influencer contracts, is the lead council for Digital Brand Architects. She discussed game-changing rulings and said the lines between influencers and celebrities are now more blurred than ever. Once she weighed in, the other three panelists deferred to her comments as if they were the Highest Paid Person’s Opinion (HiPPO). 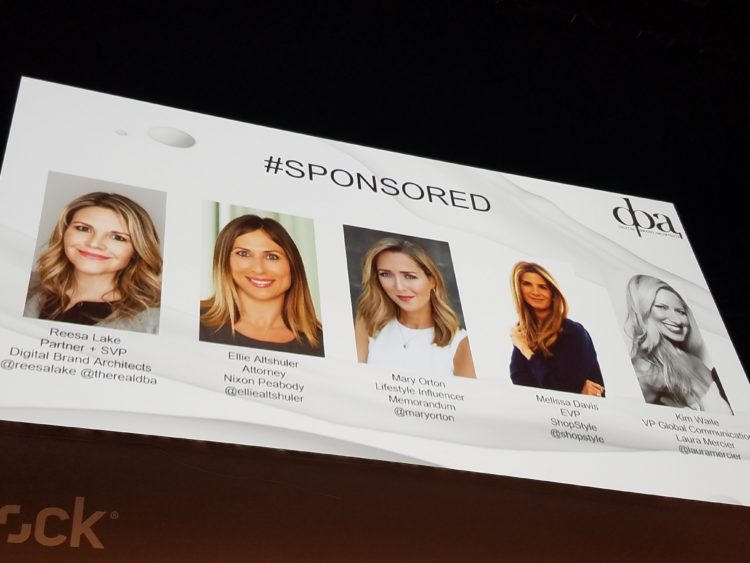 So, what had promised to be a lively discussion “from multiple points of view,” turned into asymmetrical conversation with more than one panelist asking at one point or another, “What do you think, Ellie?” Nevertheless, video marketers still need to know if “Sponsored is a dirty word or new normal. So, let me summarize what Altshuler had to say about how to be successful, creative, and remain authentic while working within the guidelines of the FTC.

If you have any influence over influencers, alert them to three developments, including the FTC’s first law enforcement action against individual online influencers for their role in misleading practices. According to the FTC, Trevor Martin and Thomas Cassell – known on their YouTube channels as TmarTn and Syndicate – deceptively endorsed the online gambling site CSGO Lotto without disclosing that they owned the company.

Here’s the backstory: Counter-Strike: Global Offensive (also known as CS: GO) is an online, multiplayer, first-person shooter game. “Skins” are game collectibles that can be bought, sold, or traded for real money. Skins have another use: They can be used as virtual currency on certain gambling sites, including CSGOLotto.com. On that site, players could challenge others to a one-on-one coin flip, wagering their pooled skins. In 2015, respondent Martin posted a video touting CSGO Lotto:

We found this new site called CSGO Lotto, so I’ll link it down in the description if you guys want to check it out. But we were betting on it today and I won a pot of like $ 69 or something like that so it was a pretty small pot but it was like the coolest feeling ever. And I ended up like following them on Twitter and stuff and they hit me up. And they’re like talking to me about potentially doing like a skins sponsorship like they’ll give me skins to be able to bet on the site and stuff. And I’ve been like considering doing it.

Martin followed up with more videos on his YouTube channel showing him gambling on the CSGO Lotto site. In addition, he tweeted things like “Made $ 13k in about 5 minutes on CSGO betting. Absolutely insane” and posted on Instagram “Unreal!! Won two back to back CSGOLotto games today on stream – $ 13,000 in total winnings.” 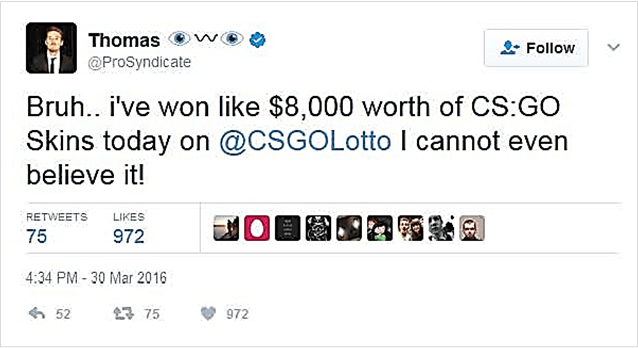 Well, Bruhs, while we’re on the subject of things we cannot even believe, did either of you like consider clearly disclosing that you like owned the company – a material connection requiring disclosure under FTC law?

The complaint also challenges how the respondents ran their own influencer program for CSGO Lotto. They paid other gamers between $ 2,500 and $ 55,000 in cash or skins “to post in their social media circles about their experiences in using” the gambling site. However, the contract made clear that those influencers couldn’t make “statements, claims, or representations . . . that would impair the name, reputation and goodwill” of CSGO Lotto. And post they did on YouTube, Twitch, Twitter, and Facebook – in many instances, touting winnings worth thousands of dollars.

According to the FTC, Cassell, Martin, and CSGOLotto, Inc. falsely claimed that their videos and social media posts – and the videos and posts of the influencers they hired – reflected the independent opinions of impartial users. The complaint also charges that the respondents failed to disclose the material connection they had to the company – and the connection their paid influencers had. The proposed settlement requires Cassell, Martin, and the company to make those disclosures clearly and conspicuously in the future. The FTC is accepting public comments about the settlement until October 10, 2017.

An interesting aside: This isn’t the first time Cassell’s name has appeared in an FTC complaint. In a 2015 settlement with Machinima, the FTC alleged that Cassell pocketed $ 30,000 for two video reviews of Xbox One that he uploaded to his YouTube channel. Although the FTC didn’t sue him, the complaint in that case alleged, “Nowhere in the videos or in the videos’ descriptions did Cassell disclose that Respondent paid him to create and upload them.”

The next development of interest to influencers relates to more than 90 educational letters the FTC sent to influencers and brands in April 2017, reminding them that, if influencers are endorsing a brand and have a “material connection” to the marketer, that relationship must be clearly disclosed, unless the connection is already clear from the context of the endorsement.

21 of the influencers who got the April letter just received a follow-up warning letter, citing specific social media posts the FTC staff is concerned might not be in compliance with the FTC’s Endorsement Guides. But the letters are different this time. The latest round asks the recipients to let the FTC know if they have material connections to the brands in the identified social media posts. If they do, the FTC has asked them to spell out the steps they will be taking to make sure they clearly disclose their material connections to brands and businesses.

Updated Guidance for Influencers and Marketers

The FTC has also just released an updated version of The FTC’s Endorsement Guides: What People are Asking, a staff publication that answers questions about the use of endorsements, including in social media. The principles remain the same, but we’ve answered more than 20 new questions relevant to influencers and marketers on topics like tags in pictures, disclosures in Snapchat and Instagram, the use of hashtags, and disclosure tools built into some platforms. You’ll want to read the updated brochure for details, but here are four “heads up” points for influencers:

Now, I’m not a lawyer. But, I know enough to recommend that you talk with one about how to be successful, creative, and remain authentic while working within the guidelines of the FTC. That’s right, I would have differed to the HiPPO, too. Hey, there are plenty of other things worth debating.