Each year for the past three years, Activate has taken a deep dive into major consumer trends, technology innovations, and industry dynamics as part of the Wall Street Journal D.Live Conference. This year, the management consulting firm identified nine important insights that it predicts will shape or reshape the media industry in the year to come.

I’ve read all 140 slides in Activate’s deck on SlideShare and found that one of their surprising and unexpected insights is something that video marketers will want to know, analyze, and act on – “Big Influencers and Media Brands will Rule Web Video.” Let’s take a closer look at this key trend in the digital video marketing business.

According to Activate, consumers will dramatically increase their overall time spent watching digital video from 2017 to 2021. Okay, that gentle breeze is not going to knock any leaves out of the trees. But, here’s what will: Activate says the top 1% of creators drive 94% of the views on YouTube. 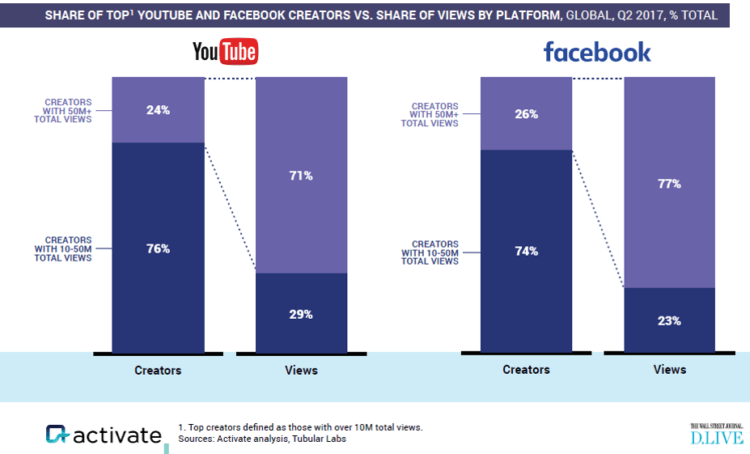 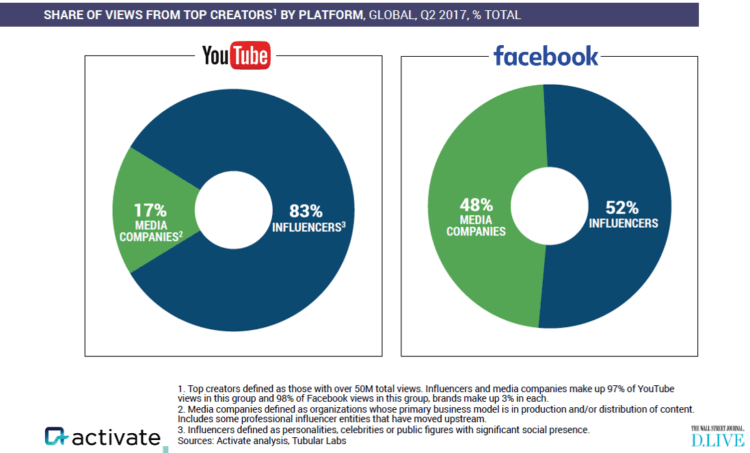 Activate’s analysis of Tubular’s data confirms that influencers and media companies make up 97% of YouTube views in this group of top video creators with more than 50 million views. And 98% of Facebook views come from influencers and media companies. Brands only make up 3% of the views on these platforms. Influencers are defined as personalities, celebrities or public figures with significant social presence. Media companies are defined as organizations whose primary business model is in production and/or distribution of content. This includes some professional influencer entities that have moved upstream.

How Brands Can Find the Right Content Partners to Work With

Activate analyzed the top five YouTube influencers by subscribers in four categories: How-to & Style (like Yuya), People & Blogs (like Roman Atwood), Comedy & Entertainment (like HolaSoyGerman), and Gaming (like elrubiusOMG) as of October 2017. The management consulting firm concluded: “Top web video influencers range across content areas and platforms.” Which may be an obvious statement, but a vital one if you are brand looking to work with the right influencer to reach the right target audience. Combined, these influencers have over 70 billion views on YouTube. And all of these influencers have a strong presence on a second platform, ranging from Instagram (13) or Twitch (5) to Facebook (2).

Activate also analyzed Tubular data for the top U.S. media company creators on YouTube and found 49% are in the Entertainment category (like Ellen), 22% are in Music & Dance (like Justin Bieber), and 9% are in News & Politics (like The Young Turks). Oh, and these media company creators include Smosh, which used to be recognized as an influencer but has recently worked on films produced by Lionsgate and Columbia Pictures, so they’ve been “moved upstream.” So, kudos to Andrew Hecox and Anthony Padilla, who began to post videos on YouTube in the autumn of 2005. 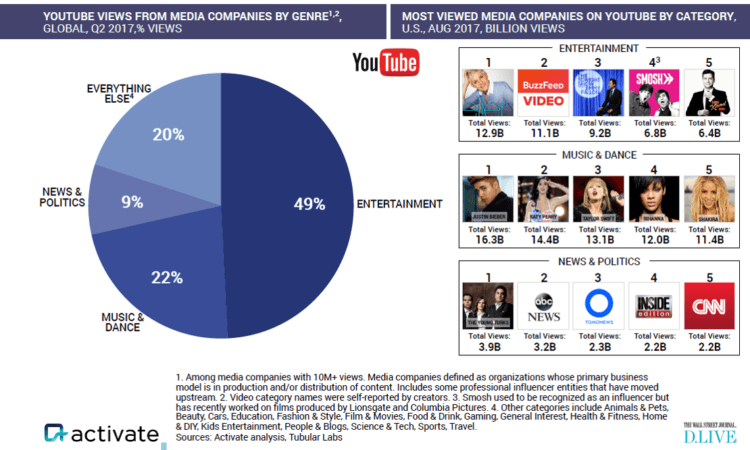 Next, Activate analyzed Tubular data for the top U.S. media company creators on Facebook and found 61% are in the Entertainment category (like Bright Side), and 10% are in News & Politics (like NowThis). So, even if a couple of the categories are the same, there are different leaders on different platforms. 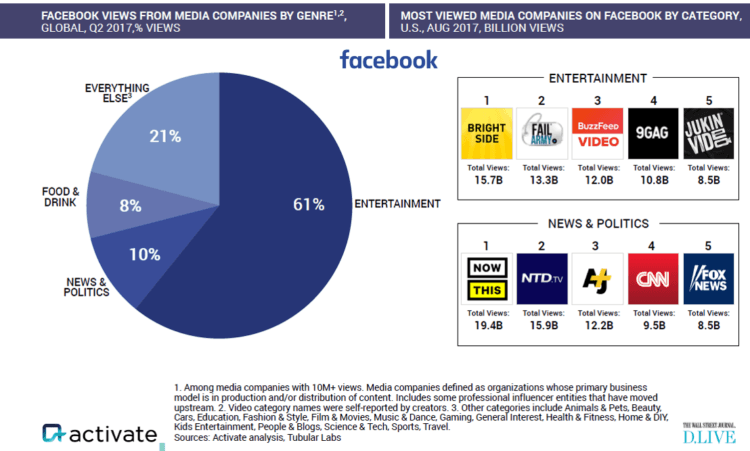 In fact, Activate says, “Influencers who start on a platform do not typically transfer success to another.” So, as I’ve observed back in 2015, the social video market is segmented, not fragmented. Back then, the analogy that I used was: “The European market isn’t fragmented; it’s segmented. Not only does each country have its own language, each one also has its own culture and customs as well as its own folk heroes. And just because 320 million Europeans in 24 countries use the euro doesn’t mean that I’d market a product in France, Germany, Italy and Spain with the same online video that I’d created for an audience of 64 million people in the U.K. (which, of course uses the pound as its currency).” And I wrote that before Brexit.

So, long-time readers of Tubular Insights will not be shocked to read Activate’s observation: “Web video platforms satisfy different content preferences (and) media companies will need to play to each platform’s strengths.” And their analysis extends beyond YouTube, Facebook, and Twitch; it includes Instagram and Snapchat, too.

Social Video and the Shift to Live-streaming

Activate also analyzed Tubular data and concludes: “The platforms are also shifting into live streaming — this medium has exhibited rapid growth in views and time spent.” It also includes a chart that may surprise some video marketers. It shows Twitch, a subsidiary of Amazon.com, as the leader in this category (with 743,000 average live streaming viewers), followed by YouTube Live (with 318,000), Facebook Live (with 61,000), and Periscope (with 23,000). This should stop “the rooster’s hallylooyer as he tiptoes on the fence.”

Activate also predicts” “Live-streaming creators will use crowdfunding platforms, such as Patreon, to monetize directly through fans.” This is something that the VlogBrothers, aka the Green brothers, John Green and Hank Green, have been saying since YouTube’s Brandcast event in 2015. So, it’s significant that Activate has come to a similar conclusion independently.

Now, that’s the big story. But, there are lots of other surprising and unexpected insights in the Activate Tech & Media Outlook 2018. For example, did you know there are 31 hours in a day? If you want, I can share my thoughts on these in a future post. Just let me know if that’s something that you’d be interested in reading by sharing your thoughts on Facebook or Twitter.