One of the must-attend sessions at Advertising Week this year was “Storytelling Is Dead.” It was billed as a seminar by Raja Rajamannar, the Chief Marketing and Communications Officer of Mastercard, but I was expecting a wake. Hey, storytelling has been very, very good for me so, I wasn’t really looking forward to hearing some guy from a credit card company tell me that “Mastercard believes we need to stop being great storytellers.” But, boy, was I wrong.

How To Break Through to Your Customers

Rajamannar defines “storytelling” as talking at consumers. And, since the “Mad Men” era, brands have used advertising to broadcast their stories at a large audience of consumers. But, it’s stopped working. He told the audience of advertisers in the Liberty Theatre, “Latest reports state that there are over 600 million devices running ad block software, and the message from consumers is clear: Stop interrupting me – I don’t want to see your ads. At the same time, consumers are constantly connected and literally have the power to make or break a brand at their fingertips. So how do you break through and engage with consumers?”

Good question. And Rajamannar had a good answer. He said, “Against the digital transformation landscape and changing consumer behavior, Mastercard believes … it is time to put consumers at the center of our efforts; it’s time to be great story-makers.”

Time out. Aren’t “story-makers” the same Mad Men (and women) that we used to call “storytellers”?  Doesn’t Mastercard still have McCann-Erickson as its agency of record? Is this just a new variation on “the King is dead; long live the King” expression that the British have been using for centuries? 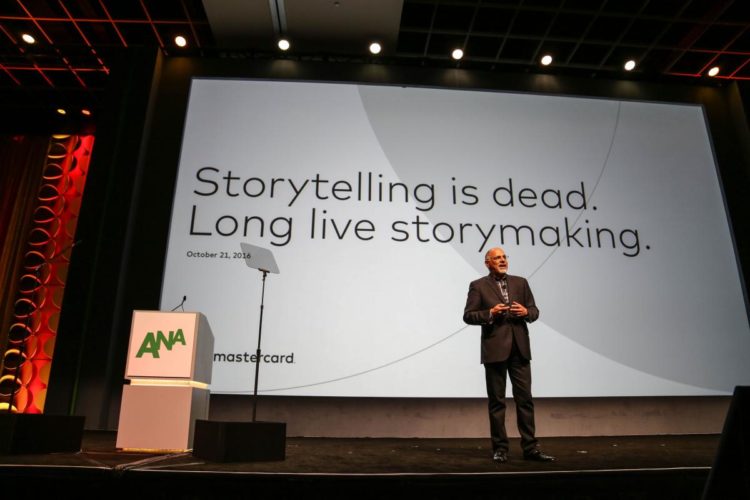 No, this is a much bigger idea. Rajamannar said “story-making” is the combination of “art, science, and necessity” that was developed as a response to a “society where the pace of technology and information exchange only continues to speed up; and where consumers only allow brands a few mere moments to make or break a relationship.”

Rajamannar explained, “Studies show and retail sales data supports that today, consumers value experiences over things. Mastercard’s Priceless campaign – now in its 20th year – was founded on the insight that experiences matter more than things, but the way it is executed today is much different. Mastercard has evolved its Priceless strategy from a single traditional advertising campaign to a holistic experiential-led marketing platform.” Now, I know what you’re thinking: “What the heck is a holistic experiential-led marketing platform?” Here’s Rajamannar’s definition: “Mastercard is transforming into an experiential brand by doing 3 things:

“We’ve moved our brand promise from being the ‘best way to pay’ to ‘connecting people to Priceless possibilities.’” That’s a big idea.

Here’s the backstory: About four years ago, Mastercard developed a strategic framework – called “Marketing 4.0” – which recognized just how important “connections” had become and realized that the Priceless campaign should not be limited to traditional advertising.

Rajamannar explained, “Over the years, marketers have used various techniques to relate with consumers. Marketing 1.0 was the era of logic/rational side of the brain and very focused on products’ features and benefits. In that era, brands underscored messaging like ‘new,’ ‘improved,’ and ‘best seller’ – brands like Dyson did this product-focused marketing well. In Marketing 2.0, the era of emotion, we saw brands like Coca-Cola appealing to emotions with their ‘open happiness’ campaign, and of course our own Priceless campaign, which was founded in the insight that ‘experiences matter more than things.’ Amazon stands out in the era of Marketing 3.0, where extensive data and intensive data analytics drive marketing. And now in Marketing 4.0 – it is the new era of connections. We view this as the era of connecting people to what truly matters to them. Simply put, this is because the world has changed and arguably people do not want brands to waste their time or attention.”

However, this strategic insight had consequences. Rajamannar said, “To win with today’s consumer, we need to go way beyond showing priceless experiences in commercials, to giving our cardholders the tools to create their own. We need to move from ‘simply’ observing priceless moments to enabling priceless experiences.” Rajamannar also shared several stories – pun intended – that illustrate how Mastercard’s efforts are energizing its brand and driving its business.

A Masterclass in Storytelling from Mastercard

Uwe Bindel is no ordinary soccer fan. He has gone to jaw-dropping lengths to support his beloved FC Bayern Münich: from defying the Stasi as a teenager in communist East Berlin, to choosing a UEFA Champions League match over his 20th wedding anniversary holiday.

Uwe believed he was taking part in a documentary on “Über-fans,” but little did he know he was about to be surprised by his idol, Bayern Munich midfield legend and Germany’s most capped player of all time Lothar Matthäus. To celebrate their sponsorship of the UEFA Champions League in advance of the 2015 Final in Berlin, MasterCard arranged this Priceless Surprise to thank the passion of football fans … but also the fans behind those fans.

Or, see what happened when Pharrell Williams surprised his fan Queen, while she was running a playgroup.

And, to celebrate The BRIT Awards 2016, Mark Ronson and MasterCard brought together 6 fans who had previously covered Uptown Funk online ­‐ Anna Shields & Blair Crichton, The Ayoub Sisters, Ross Campbell and John Atkins ­‐ to create a brand new cover, and share their Priceless Surprise with Ronson himself.

Americans are familiar with Mastercard’s Stand Up To Cancer program. It’s one of several Priceless Causes that the brand supports. For example, here’s what the Priceless Causes program has done for the World Food Program.

Also, Priceless Cities is a global MasterCard program designed to enable MasterCard cardholders to live unique experiences and receive benefits that add value to their lives. For example, you can experience the magic of New York City on a night like no other. From The Modern, to Jimmy and Center Bar, enjoy wonderful food paired against the backdrop of the dramatic cityscape.

According to Tubular’s breakthrough DealMaker software , sponsored videos are also part of Mastercard’s “holistic experiential-led marketing platform.” The brand has 76 partners that have made 798 videos, which have a total of 45.5 million views and over 1.3 million engagements. For example, “How far would you go?” was uploaded to UEFA Champion League’s Facebook page on April 19, 2017. It currently has 2.4 million views and 15,000 engagements.

Now, that’s taking story-making to a level that traditional storytellers only reach once in a blue moon. It’s the difference between creating a priceless experience for your customers that they want to share with their friends, family, and colleagues and merely telling a story – even one with emotion – about the features and benefits of your products or services. That’s a very big idea.